A celebratory concert, featuring a wealth of guest artists

The GALA Concert, in its third year, marks the season"s final concert at Sapporo Concert Hall Kitara. Part 1 features a luxurious lineup including Kenji Miyazawa"s classical music-filled "Gauche the Cellist" (narrated by Yuko Natori), Sergey Antonov (cello), and Michie Koyama (piano), followed by superstar of the Gagaku world Hideki Togi (hichiriki) and Sergei Nakariakov (trumpet) playing along with the PMF Orchestra, and the annual PMF Song ~Jupiter~ sung along with the audience: a program allowing you to experience the fun of classical music to your heart"s content.
Part 2 features Yutaka Sado leading the PMF Orchestra in the "Program C" concert, the culmination of all of the hard work of this year"s Academy. Sergey Antonov, winner of the International Tchaikovsky Competition, will give a highly anticipated performance, backed by his impeccable technique, as soloist in the "Variations on a Rococo Theme." And Shostakovich"s Symphony No. 5, with its dazzling and majestic final movement, will surely provide a fitting finale to the GALA Concert.
Why not dress up a bit and spend a Saturday afternoon at this glamorous concert? 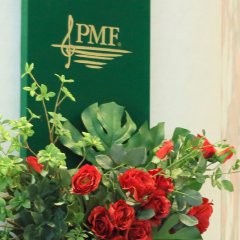 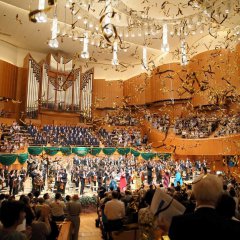 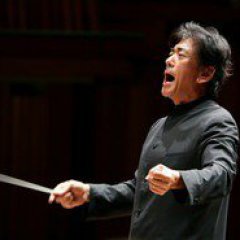 The performance is scheduled to end at 19:00.

Due to health related issues, conductor Lorin Maazel has become unable to travel to Japan. In his place, Mr. Yutaka Sado will conduct. In light of these exceptional circumstances, those who wish to obtain refunds for purchased tickets will be given the opportunity to do so.