Once again, we would like to express our gratitude to all who applied for PMF 2019. The numbers increased once again this year; altogether, there were 1,324 applicants, from 67 countries and regions around the world.

The total number of applicants for this year's Orchestra Academy is 1,287, from 65 countries and regions. This represents an increase of 122 people compared to last year. The overall competitive ratio is roughly 1/13.

Looking at individual instruments, flute, clarinet, horn, trombone, tuba, and harp are especially competitive this year, each with a competitive ratio higher than 1/20. Clarinet and horn applicants increased significantly - both by almost 30% compared to last year.

As for applicants' nationalities, as with last year, the largest number of applications was from the United States, followed by Japan, then Korea. There were also increased numbers of applicants from European countries (especially Spain) and Asian countries. 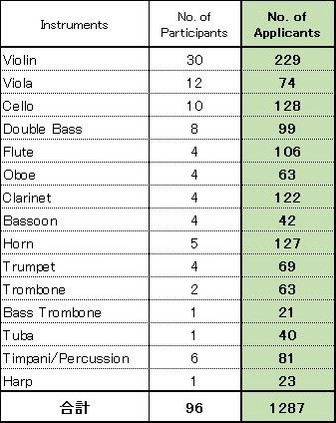 The total number of applicants to the Vocal Academy is 37, from 12 countries and regions. The largest number of applications was from Japan, followed by China and the Philippines. The competitive ratio is 1/9. 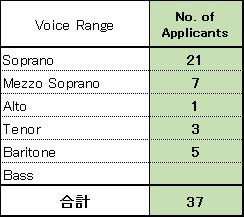 All applicants will receive notification by email of audition results by March.