The Sapporo Symphony Orchestra, founded in 1961, is Hokkaido"s only professional orchestra and has been affectionately known to Hokkaido residents as "Sakkyo." The current conductors are Music Director Tadaaki Otaka and Principal Guest Conductor Radomil Eliška. Based at Sapporo Concert Hall Kitara, which boasts some of the best acoustics in the world, the orchestra is distinguished by its clear sound and dynamic power of expression, inspired by Hokkaido"s vast natural beauty and charm. The orchestra gives over 120 performances a year with its subscription concerts, concerts around greater Hokkaido and Tokyo, concerts for young people, and outdoor concerts. It has also released a number of CDs, including its Scandinavian Music Series, a Beethoven Symphony Cycle, Elgar and Bruckner with Otaka, and a Czech Music Series with Eliška, each receiving high praise. The orchestra is now working on the Sibelius Symphony Cycle, the second CD of which will go on sale this year. Enthusiastically touring overseas, the orchestra has visited the U.K. (2001), South Korea (2005), and Europe (in 2011: its 50th anniversary) with Otaka, garnering the highest praise in each. It now plans to visit Taiwan in 2015. This year, the orchestra will celebrate its 70th appearance with PMF since 1990. 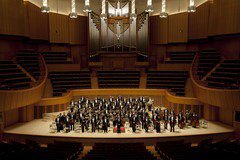