Tatsuo Nippashi was born in Tokyo. He is an alumnus of the Tokyo College of Music. He won various awards in the 26th Japan Wind and Percussion Competition, including 1st place, the Special Grand Award, the Special Jury Award, the Governor of Tokyo Award, and the Minister of Education, Culture, Sports, Science and Technology Encouragement Award. He also won 1st place, the Iwatani Award (Audience Award), and the E. Nakamichi Award in the 80th Music Competition of Japan. He was a member of the Seiji Ozawa Music Academy Orchestra from 2007 to 2011. As a soloist, Nippashi has performed with the Yomiuri Nippon Philharmonic Orchestra and the New Japan Philharmonic Orchestra. He has participated in the Kiso Music Festival and the Spring Music Festival in Tokyo. He studied horn under Teruhisa Goto, Shiro Ide, and Nobuyuki Mizuno. He is a former principal of the Japan Philharmonic Orchestra, and is currently Principal Horn of the Yomiuri Nippon Symphony Orchestra. He is a member of the Kioi Hall Chamber Orchestra. He currently serves as a part-time lecturer at the Kunitachi College of Music and Tokyo College of Music. 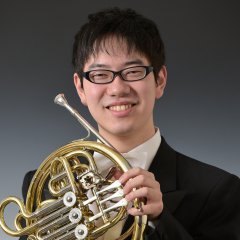