Nao (Mikihiro) Nozu first graduated from Toho Gakuen College of Music in Tokyo before going on to study at the Royal Academy of Music in London, where he obtained a Recital Diploma – the school’s highest award. He then entered the Graduate School of Yale University on a scholarship. Nozu has been the Principal Flutist of the Osaka Philharmonic Orchestra since 1995, having previously served in the same position in the Lappeenranta City Orchestra in Finland. He has been invited from all around the world to perform as a soloist, including his 2004 premiere of Hisatada Otaka’s Flute Concerto in Finland. He participated in the 1st and 2nd Pacific Music Festivals in 1990 and 1991. He has appeared on many NHK-FM programs such as “Fresh Concert,” “Meikyoku Recital,” and more. He plays an inscribed flute made 150 years ago in Paris by the legendary Louis "Esprit" Lot. As an orchestral player, He is greatly acclaimed for his timbre, musicality, and technique by conductors around the world. He currently holds teaching positions at the Soai College of Music, Osaka International Takii High School, and Oita High School. Nozu served as a full-time lecturer at the Toho Gakuen School of Music from 2003 to 2006 and was a guest tutor at the Stratford International Flute Festival in the UK in 2007 and the Tai Shan International Music Camp in China in 2018. He is also a member of the juries for the Student Music concours of Japan and the Japan Flute Convention Competition, and is a committee member of the Japan Flute Association and the Asia Flutists Federation. His mentors include Yumi Miura, Shinya Koide, William Bennett, Geoffrey Gilbert, and Thomas Nyfenger. In 2010, Nozu was made an Associate of the Royal Academy of Music (ARAM). 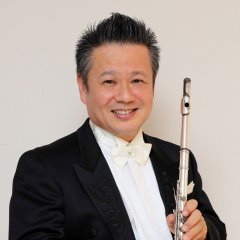