Born in Bratislava, Slovakia, Ladislav Papp studied at the Bratislava Conservatory with Ludmila Sawiczová before going on to obtain his higher education diploma from the Zurich Conservatory under Catherine Michel in 2003. In the same year, Papp became a solo harpist with the Darmstadt State Opera, and was admitted to the Xavier de Maistre master class in Hamburg. Since 2004, Papp has been both a member of the Bühnenorchester der Wiener Staatsoper and a permanent substitute for the Wiener Philharmoniker. He has appeared as a soloist in Slovakia (Bratislavské hudobné Slavností) and taken part in other major events and festivals in Prague, Budapest, and Geneva. Papp is also a devoted chamber musician, and his first solo recording, "Harp is my No. 1," preceded a duo recording with his wife, flutist Justina Papp, entitled "Harp & Flute." Papp has received 1st prizes in various competitions, including the 1998 Reinl Award International Competition in Vienna, the Pressburger music festival SK International competition for young performers in 1999, the Kiwanis Music Award for Harp in Zurich, and more. This is his second appearance at PMF since 2017. 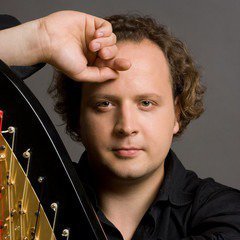