Albrecht Mayer studied oboe with Gerhard Scheuer, Georg Meerwein, Maurice Bourgue, and Ingo Goritzki and began his professional career in 1990 as principal oboist of the Bamberger Symphoniker. Since 1992 he has occupied the same position with the Berliner Philharmoniker. He has appeared as a soloist with Claudio Abbado, Sir Simon Rattle and Nikolaus Harnoncourt. Mayer considers it important to find time for chamber music, and performs regularly with partners such as the pianist Hélène Grimaud, Leif Ove Andsnes and the bass-baritone Thomas Quasthoff. In addition to his activities as a soloist, Mayer also works regularly as a conductor. The orchestras he has worked with include the Düsseldorfer Symphoniker, the Staatskapelle Halle, the Nürnberger Symphoniker, and the Schleswig-Holstein Festival Orchestra. Mayer was presented with an Echo Classic Award by the Deutsche Phono-Akademie in 2004, 2008, and 2010. In 2013 he received the Kulturpreis Bayern. This is his first appearance at PMF. 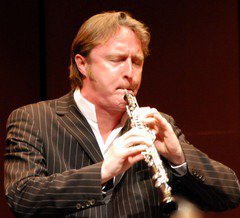