Born in Berlin, Andreas Blau studied at the Hochschule für Musik in Berlin. He furthered his studies at the Salzburg Mozarteum and in the U.S.A. and received several international awards. At the age of twenty, he became Solo Flutist of the Berliner Philharmoniker. As a soloist, he performed under the direction of Herbert von Karajan, David Oistrach, Yehudi Menuhin, Claudio Abbado, Sir Simon Rattle and many others. Since 1973 he has been teaching at the Orchester-Akademie der Berliner Philharmoniker and many of his students are active in major orchestras around the world. He also teaches master classes in many countries and is invited to numerous international competitions as a jury member. In 2005 Blau was appointed Professor h.c. of the Shanghai Conservatory of Music. He is a member of the Berliner Philharmonische Bläsersolisten and the founder and artistic director of the ensemble Die 14 Berliner Flotisten. This is his seventh appearance at PMF since 1996. 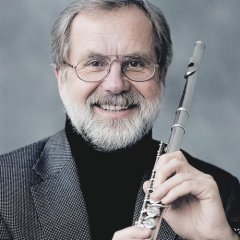