Hans Peter Ochsenhofer studied violin and trumpet at the Graz University of Music. He continued his violin studies with Franz Samohyl at the Universität für Musik und darstellende Kunst Wien, and in 1971 he became a member the Wiener Symphoniker. Several years later, he switched to viola, and returned to the Universität to work with Siegfried Führlinger. Ochsenhofer joined the Wiener Staatsoper in the same year and was named Principal Viola in 1978. He subsequently won a position with the Wiener Philharmoniker in 1980. He is a member of the Wiener Streichquartett and Wiener Virtuosen, with whom he has toured, recorded, and appeared in broadcasts. In 2005 he founded the chamber orchestra "Wiener Mozartisten" and began working as a conductor. This is his thirteenth appearance at PMF since 1996. 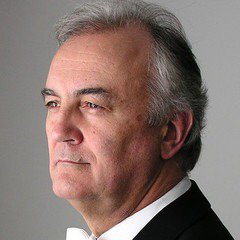