Marie-Luise Modersohn was born in Leipzig and completed her training with Günter Passin at the Academy of Music and Theatre in Munich. Following the successful completion of her studies, she became principal oboist in the Deutsches Symphonie-Orchester Berlin at only 20 years of age. Marie-Luise Modersohn has appeared as a soloist with such renowned orchestras as the Deutsches Symphonie-Orchester Berlin, the Berliner Staatskapelle and the Ensemble Oriol under the direction of such eminent conductors as Kent Nagano, Herbert Blomstedt, and Marek Janowski. Since 2005, Marie-Luise Modersohn has served as 1st principal oboist with the Münchner Philharmoniker. This is her first appearance at PMF. 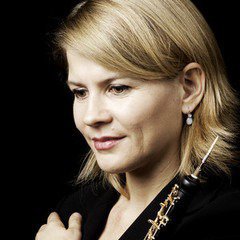