Born in Mallersdorf. Franz Schindlbeck has been drumming since he was five. At twelve he began regular percussion instruction and studied from 1983 to 1988 with Hermann Gschwendtner at the Trossingen Musikhochschule. Before becoming a member of the Berliner Philharmoniker in 1992, he gathered his first orchestral experience as principal percussionist between 1988 and 1992 at the Mannheim Nationaltheater. Schindlbeck loves jazz as well as classical music. While still a student, he was already playing in a number of bands and as drummer in the youth big band of Baden-Württemberg state. In 1999, together with Philharmoniker colleagues, he founded the Berlin Philharmonic Jazz Group. Since 1994 he has taught in the Philharmonic"s Orchestra Academy.
This is his first appearance at PMF. 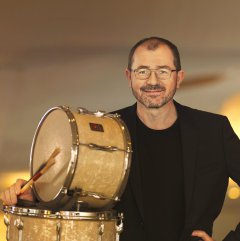