Celebrated and gifted, Koyama is one of Japan"s leading pianists. Since winning awards at both the International Tchaikovsky Competition and the International Chopin Piano Competition at the start of her career, she has consistently remained at the forefront of her instrument, ceaselessly performing concertos, solo recitals, and chamber music.

The monumental project she began in 2006 to give 24 recitals over the span of 12 years, one each in fall and spring, will conclude in fall of 2017. It was held in six cities: Tokyo (Bunkamura Orchard Hall), Osaka, Sapporo, Sendai, Nagoya, and Fukuoka.

Following the 2011 Great East Japan Earthquake, she has gone to perform at schools and public facilities in areas affected by the disaster, and in Sendai in 2015 she started a project of which she is the executive producer, entitled, "Bolero: Plaza of Children"s Dreams."

She has an exclusive CD contract with Sony Music Japan International.

Her 30th and most recent recording for the label, her first Bach album, of the Goldberg Variations, received a special commendation from the magazine "Record Geijutsu."

Koyama has also published a book of her own essays, published by KADOKAWA.

She has been awarded the 2005 Agency for Cultural Affairs National Arts Festival Grand Prize for Music, the 2013 TonenGeneral Music Award in Western Classical Music, a 2013 Japan Record Academy Award for Instrumental Music (for her album, "Chaconne"), the 2015 NHK Symphony Orchestra Arima Prize, and the 2015 Agency for Cultural Affairs National Arts Festival Excellence Award for Music, in addition to a Music Award at the 28th Music Pen Club Award for Solo Performance of Classical Music in 2015, and an Arts Award from the Ministry of Education, Culture, Sports, Science and Technology in 2016.

Koyama completed both her undergraduate and graduate studies at the Tokyo University of the Arts(formerly the Tokyo National University of Fine Arts and Music). She studied under Michiko Yoshida and Hiroshi Tamura.

Koyama performed as soloist with the NHK Symphony Orchestra at PMF 1999 and 2001, and subsequently appeared as guest soloist at PMF 2013 and 2014. 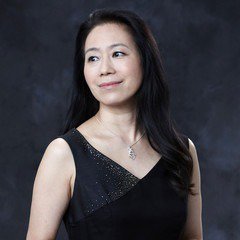