Shoichi Sean Kubota, a native of Tokyo, was chosen the winner of the Chicago Symphony Orchestra's (CSO) First International Sir Georg Solti Conducting Competition and Apprenticeship in 2011 out of 225 applicants from 40 countries on five continents. Kubota subsequently served as CSO's conducting fellow under the direction of its Music Director Riccardo Muti.
During his tenure with the Chicago Symphony Orchestra, Kubota had the opportunity to work closely with distinguished conductors such as Riccardo Muti, Bernard Haitink, Charles Dutoit and Edo de Waart on more than 30 programs and accompanied them on their domestic and international tours.
Kubota has conducted numerous premier ensembles throughout the world including the Milwaukee Symphony Orchestra, the Civic Orchestra of Chicago, the Melbourne Symphony Orchestra and the Orchestra of Sofia. His guest conducting mentors have included Hugh Wolff, Marin Alsop, Leonard Slatkin and Kurt Masur.
Also active as an operatic conductor, Kubota has studied Così fan tutte, Cavalleria Rusticana, Tosca, Suor Angelica, and Il Barbiere di Siviglia with Giangluigi Gelmetti at the Accademia Musicale Chigiana and the Rome Opera House. Later, he studied Otello, Simon Boccanegra, Macbeth, and Nabucco with Riccardo Muti at CSO and the Rome Opera House and conducted a backstage ensemble as Muti's assistant. In 2013-14, as part of the Verdi bicentenary year season, he continued to work closely with Muti at the Chicago Symphony Orchestra.
Kubota studied with Otto-Werner Mueller at The Juilliard School and received his Master of Music degree in orchestral conducting in 2005. At the Mannes College of Music he studied with David Hayes and received his Professional Study Diploma in 2007. He received numerous awards during his studies such as S&P Stanley scholar, N. T. Milani scholar, Mary Power award and Bruno Walter award. During the past summer seasons, he has appeared as a fellow conductor at the Accademia Musicale Chigiana where he earned the Diploma di Merito studying with Gianluigi Gelmetti and he appeared at the American Academy of Conducting at the Aspen Music Festival studying with David Zinman. He is a 2008-2009 season recipient of the Japanese Government Artist Fund.
Kubota has served as music director of 92Y School of Music Orchestra, which is one of the oldest American orchestras with a 95-year history. He has been serving as music director of Orchestrada in Tokyo since 2011.
This is his first appearance at PMF. 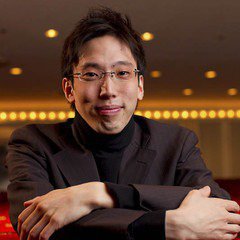