Born in Caracas, Venezuela, Domingo Hindoyan began his music studies as a violinist and a member of the renowned Venezuelan musical education program El Sistema. Hindoyan obtained a master"s degree in conducting at the Haute Ecole de Musique de Genève with the highest distinction with Prof. Laurent Gay and thereafter participated in several master classes with Bernard Haitink, David Zinman and Jesus Lopez Cobos. Domingo Hindoyan was a successful laureate at the Cadaqués and Malko conducting competitions, as well as at the Jesus Lopez Cobos Opera conductor competition in Madrid. He has also worked as assistant to Claudio Abbado for concerts with the Simon Bolivar Symphony Orchestra in Lucerne and Caracas. Thanks to his Syrian-Armenian descent, Domingo has also been a standing member of the West Eastern Divan Orchestra as a violinist since 2006.

In 2012 Hindoyan was selected by the highly prestigious Allianz International Conductors Academy to work with the London Philharmonic and the Philharmonia Orchestra under the guidance of world-renowned conductors such as Esa-Pekka Salonen, Sir Andrew Davis and John Carewe. Following his participation in the Academy, Hindoyan was invited to conduct the Philharmonia Orchestra in July 2012, which led to an immediate re-invitation.

Hindoyan is also increasingly gaining recognition as an opera conductor. In early 2012, he conducted 10 performances of l"Elisir d"Amore at the Bregenz Landestheater. During the current season 2012/13, Domingo Hindoyan is a regular guest conductor at the Graz Oper, where he conducts a revival of La Traviata and a new production of Hänsel & Gretel, as well as a ballet evening with Stravinky"s "Sacre du printemps" and Ravel"s "Daphnis et Chloé."

Other engagements during the 2012/13 season include Royal Scottish National Orchestra, Orquesta Ciudad de Granada, Deutsche Radio Philharmonie Saarbrücken, the Philharmonia London and Sinfonieorchester Basel. He will make his debut in Japan during the 2013/14 season with the New Japan Philharmonic.

Domingo Hindoyan has been appointed as the first assistant to Daniel Barenboim at the Staatsoper Berlin starting from 2013.

Hindoyan was an academy member of the Pacific Music Festival (PMF) in 2003 and 2004 as a violinist, and this is his first appearance at PMF as Guest Conductor. 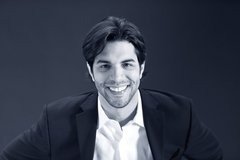