Born in Tokyo, Fumiaki Miura began his musical education with Tsugio Tokunaga at his hometown conservatory before moving to Vienna to carry on his studies with Pavel Vernikov and Julian Rachlin. Since age 16, Fumiaki has been mentored and guided by Pinchas Zukerman. In 2009 he was awarded First Prize at the prestigious Joseph Joachim Hannover International Violin Competition, becoming the youngest winner in the competition's history.

His discography includes Prokofiev's violin sonatas with pianist Itamar Golan for Sony Japan, as well as the Mendelssohn and Tchaikovsky violin concertos with the Deutsches Symphonie-Orchester Berlin and Hannu Lintu released by the Avex-Classics label.

Fumiaki Miura plays the 1704 “ex Viotti” Stradivarius, kindly loaned to him by the Munetsugu Foundation.

This is his first appearance at PMF. In addition to his performance with the PMF Orchestra JAPAN on Program B, he will also perform a recital. 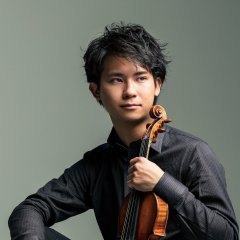