Hayashi graduated from the Musashino Academia Musicae and its post graduate school. She performed at Musashino Academia"s Graduation Concert. She completed the 54th Nikikai Opera Training Institute Master Class and received an Excellence Award upon graduation. She also studied at the New National Theatre Opera Studio. She was a Fukui Naoaki Kinen Scholar for the year 2004.

She made her debut as the Countess in "The Marriage of Figaro." While at the New National Theatre Training Institute she performed as Fiordiligi in "Cosi Fan Tutte," the Lady in "Cardillac," the First Lady and Pamina in "The Magic Flute," and Ariadne in "Ariadne auf Naxos."
Her awards include the second prize in the 4th Czech Music Competition and the third prize of the 3rd Soprano Bel Canto Concorso. She studied with Mami Kamada, Kazuko Nagao, Junji Nagamachi, Elena Obraztsov, and Mihoko Kinoshita. She was born in Gunma Prefecture.
This is her first appearance at PMF. 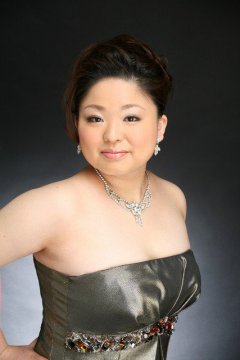