Max Pommer was born in Leipzig, Germany. His international breakthrough as a conductor came with the "New Bach Collegium Musicum," the ensemble which he founded in 1978 when he was Music Director of the University of Leipzig (1974-1987). The recordings received international awards including the "Deutscher Schallplattenpreis" for Bach Brandenburg Concerto, and were well known in Europe and the USA long before the reunification of Germany.

Max Pommer studied conducting and piano at the Academy of Music and completed the doctorate course at the University of Leipzig. From 1987 to 1991, he was Principal Conductor of the Leipzig Radio Symphony Orchestra (MDR), and from 1990 to 2003, he was Professor in conducting at the Saarland Academy of Music, Saarbrücken. At the Academy, Dr. Pommer founded "Saar-Lor-Lux Orchestra," the orchestra which made artistic contribution to European unification. Luxemburger Wort commented to Max Pommer"s work with this orchestra as "His ensemble showed flawless technical mastery of the material, and the conductor"s gestures, both functional and evocative, did the rest. We experienced a rousing concert of the highest quality," and Est-Republicain, Nancy wrote, "Saar-Lor-Lux -orchestra de luxe."

From 1991, Max Pommer was closely connected with the Hamburg Camerata, one of the excellent Hamburg ensembles, and appointed Artistic Director in 2001. Apart from regular concert series in the Hamburg Musikhalle, the ensemble appeared at the prestigious festivals including Schleswig-Holstein, Mecklenburg-Vorpommern, and MDR Musiksommer. In 2000, he was appointed to be the First Regular Guest Conductor of the Holland Sinfonia (former Noordhollands Philharmonisch Orkest.)

The list of Max Pommer"s discography is long and varied. 22 recordings for Capriccio with orchestral works by Bach, Handel and Debussy, symphonies and early operas by Mozart for Berlin Classics, the complete symphonic works of the Finnish composer, Rautavaara and works by Kurt Weill for the Finnish label Ondine, and many works by Eisler, Dessau, Schönberg and other contemporary Germany composers for Eterna. 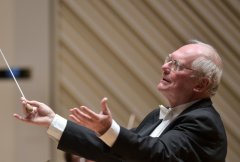