Brian Wendel joined the Vancouver Symphony Orchestra as Principal Trombone in 2017. Winner of the Alessi Seminar Asia Competition (2018) and two International Trombone Association competitions (2014 and 2016), he has performed with the Philadelphia Orchestra, the New York Philharmonic, and the New York Philharmonic Brass Ensemble, and has appeared as a soloist with the Juilliard Trombone Choir. He has worked with conductors such as Yannick Nézet-Séguin, Valery Gergiev, Esa-Pekka Salonen, Alan Gilbert, and Jaap Van Zweden, performing and recording in venues around the world. Starting on the piano at age six and the trombone at age nine, Wendel studied both classical and jazz music from an early age. Growing up in the rural town of Conway, Massachusetts, he was a student at the New England Conservatory Preparatory School in high school. Some of Brian"s early musical mentors include David Sporny, Norman Bolter, Andy Jaffe, and his father, Renato Wendel. He received his bachelor"s degree from the Juilliard School, where he was a scholarship student of Joseph Alessi. 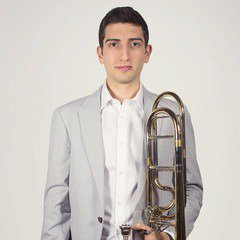