David Vonderheide has been the Principal Trumpet of the Virginia Symphony Orchestra (VSO) since 2010, after serving as their Second Trumpet from 1998. He has also been featured several times with the VSO as a soloist, including performances of the Haydn Trumpet Concerto and Copland"s Quiet City.

As a teacher he has been on the faculties of Christopher Newport University and the College of William and Mary (W&M). He was the Lecturer and Principal Trumpet with the Charlottesville Symphony Orchestra at the University of Virginia during the 2018-2019 season. At W&M he has had occasion to appear as a faculty guest soloist and record with several ensembles, in addition to being the featured guest soloist on a tour to China in 2015.

He was also the interim Principal Trumpet of the Atlanta Symphony Orchestra for the 2012-2013 season, and while with them he participated in a tour to Carnegie Hall and recorded with the orchestra, including a Grammy Nominated CD of the music of Sibelius.

He has also played as a substitute musician in prominent US orchestras including the St. Louis Symphony, Colorado Symphony, and Fort Worth Symphony. In 2018, he played as Guest Associate Principal Trumpet with the San Francisco Symphony for 4 weeks, including a tour of Southern California and 2 yet-to-be-released recordings. One of these recordings features Vonderheide as Principal Trumpet on Berg"s Violin Concerto with Gil Shaham.

Born in Madison, Indiana, he graduated from Northwestern University in 1996. A prominent student of the legendary Vincent Chicowicz, Vonderheide has gone on to contribute writings to a series of books on his teacher"s educational philosophy, in addition to recording material for a companion CD. 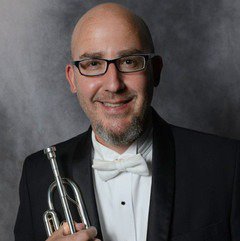