French-Canadian solo clarinetist Myriam Carrier regularly performs with world-renowned orchestras such as the Stuttgart Radio Symphony Orchestra, the Orchestre national de France, the Orchestre de chambre de Paris, the Orchestre national des Pays de la Loire, the Quebec Symphony Orchestra, and the Heilbronn Chamber Orchestra. She has been co-principal clarinetist for the Orchestre national d"Île-de-France since 2003.
An established chamber musician, Carrier"s performances have been featured on Radio France Musique, and she has performed at the Studio Bastille, the Saint-Germain-des-Prés auditorium, the Philharmony in Ljubljana, Slovenia, the Opera Maribor, and at the inauguration of the new Philharmonie de Paris.
She studied at McGill University in Montreal with Robert Crowley and Michael Dumouchel, and she completed her postgraduate studies at the Hochschule für Musik in Karlsruhe, Germany under the supervision of Wolfgang Meyer.
She recently formed a duo with the London-based pianist Niel Du Preez and she is also very active as a baroque clarinet and chalumeau player. 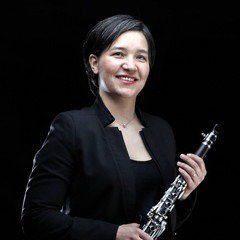