Discovered by the late Sir Georg Solti, Orsolya Korcsolan won numerous awards in New York before settling in Vienna. She has shared the stage with distinguished conductors such as Lorin Maazel, Zubin Mehta, Valery Gergiev, and as a member of the PMF Orchestra with the likes of Christoph Eschenbach, Yutaka Sado, and Michael Tilson Thomas. As a soloist, she has given numerous world premieres of contemporary concertos for violin, in Hungary, Austria, and the UK. Committed also to education, she founded and directs the Musikschule in Wien im Palais Palffy. Korcsolan graduated with distinction from the Franz Liszt Academy of Music in Budapest, then continued her studies at the Juilliard School in New York where she won the Dorothy DeLay and the Cornelius Vander Starr awards. Her latest recordings - "Silenced" on Deutsche Grammophon, and Miguel Kertsman"s Concerto for Violin, Horn and Shofar with conductor Denis Russel Davis and the London Philharmonic Orchestra on Naxos - are available worldwide. 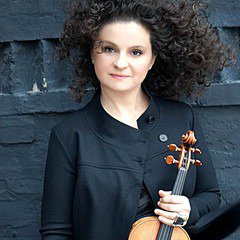