Graduate of Toho Gakuen Collage and its post graduate course, Yoko Yasui went on to study at Nikikai Opera Studio, and then obtained the scholarship from the Agency for Cultural Affairs, and further studied at Vienna National University. During the time in Vienna, she made her European debut, singing Ida in Henze"s Der junge Lord at Stadttheater Klagenfurt. This was followed by her performance of Queen of the Night of The Magic Flute at Musiktheater Vorarlberg, and Page and Rosalinde in Offenbach"s Blubeard in Bregenz Festival and St. Pölten Festival, which garnered critical acclaims by music journalists in Austria.

After her study in Vienna in 2008, Yasui made her debut in Japan performing Zerbinetta in R. Strauss"s Ariadne auf Naxos, and her outstanding coloratura and abundant musical expressions caught many music critics" and journalists" ears and the performance was sensationally acclaimed. Especially, her Queen of the Night (The Magic Flute) has been heard at various productions held at music theaters, including New National Theatre, Nissei Theatre, and Tokyo Nikikai Opera, and in 2013, Yasui was featured as the most noteworthy singer, and she again sung the role in 2018, and given massive applause. She also sung various roles in numerous opera productions, including Waldvogel in Wagner"s Siegfried, Akiko in the world premiere of Shinichiro Ikebe"s Rokumeikan, Sofie in R. Strauss"s Der Rosenkavalier, The Fiakermilli in Arabella, Marzelline in Fidelio, Nanetta in Falstaff, Olympia in Tales of Hoffman. Yasui also appeared in TV broadcasting of the 52nd and 62nd NHK New Year Opera Concert, "Untitled Concert" by TV Asahi, and NHK Meikyoku Album. In 2016 she appeared as soloist of Mahler"s 4th Symphony in the subscription concert of the NHK Symphony Orchestra. Her other performances with orchestras and conductors, include the world premiere of Jo Hisaishi"s The East Land Symphony with New Japan Philharmonic World Dream Orchestra 2016 (WDO), and New Year"s Eve concerts and her wide range of symphonic and religious repertoire, including Bach"s St. John"s Passion, Beethoven"s Symphony No. 9, Brahms"s German Missa, Orff"s Carmina Blana garner critical acclaim.
Yasui is a member of Tokyo Nikikai Opera.
This is her first appearance at PMF. 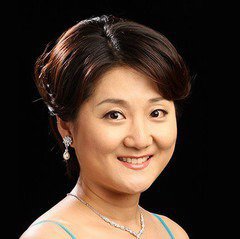