Born in Waidhofen an der Ybbs in Austria, Michael Bladerer began his musical studies on the piano before his double bass studies began a few years later. He studied double bass with Ludwig Streicher at the Universität für Musik und darstellende Kunst Wien and graduated with highest honors. He further studied with Johannes Auersperg in Graz and Norbert Duka in Berlin. Before he became a member of the Orchester der Wiener Staatsoper and the Wiener Philharmoniker in 1999, he was a member of the Bruckner Orchestra Linz and the Wiener Symphoniker and served as principal bassist of the Komische Oper Berlin. He has been a member of the Wiener Hofmusikkapelle since 2008. Bladerer frequently performs as a soloist and a chamber musician, giving more than 20 premiere performances of contemporary solo works for double bass. He also regularly gives masterclasses at various institutions, including the New England Conservatory in Boston and the USC Thornton School of Music in Los Angeles. He has participated in PMF 12 times since 2002. This year he is scheduled to take part in the online education program and a digital concert. 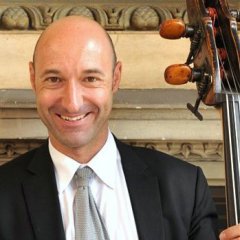