Born in Vienna in 1974, Stefan Gartmayer began his cello study with Hedy Feierl at the Vienna Conservatory in 1981. He later studied composition at the Vienna College of Music under Dietmar Schermann and Dieter Kaufmann, as well as cello with Tobias Kühne, completing his diploma with distinction in 1996. He also studied in Brescia, Aachen and Freiburg. Before joining the Vienna State Opera Orchestra in 2007, Gartmayer served as principal cello of orchestras including the Vienna Radio Symphony Orchestra and the Frankfurt Radio Symphony Orchestra, and was a member of the Gewandhaus Orchestra in Leipzig. He became a member of the Vienna Philharmonic in 2010, and in 2015, became a member of “Wiener Hofmusikkapelle.” Gartmayer is a multi-faceted musician who feels equally at home within the Baroque era, with the "Bach Orchestra of the Gewandhaus in Leipzig," and with contemporary music, having played with the Ensemble Avantgarde Leipzig and René Staar's Ensemble Wiener Collage. He first appeared at PMF in 2019. This year he is scheduled to take part in the online education program and a digital concert. 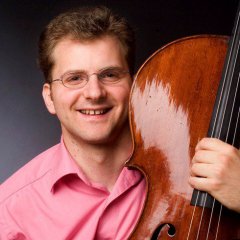