Born in Vienna, Daniel Froschauer attended the Juilliard School of Music where he was a student of Dorothy DeLay and Masao Kawasaki. He completed his studies with Pinchas Zuckerman, Alfred Staar, and Alfred Altenburger in Vienna. In 1990, he received the Young Artist Award from Musical America in New York and was a prize winner of the Concours International Pierre Lantier in Paris in 1997. In 1993, Froschauer made his recital debut in the Brahmssaal of the Vienna Musikverein. He has appeared as a soloist with the Mozarteum Orchestra Salzburg, the Japan Philharmonic, the WDR Sinfonieorchester Köln, the New York Symphonic Ensemble, the Nordwestdeutsche Philharmonie, the Reno Philharmonic, and the New York Virtuosi Strings Chamber Orchestra. Since 1998, he has been a first violinist in the Wiener Staatsoperorchester as well as in the Wiener Philharmoniker, and since 2004 he has held the position of section leader. Daniel Froschauer performs on a violin made by Domenico Montagnana in 1723. This is his eighth appearance at PMF since 2013. 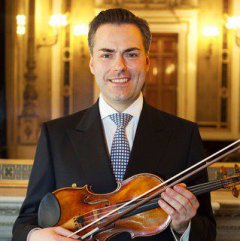