Belgian harpist Anneleen Lenaerts is making a name for herself as one of the leading soloists of her instrument. In December 2010 she was appointed Principal Harpist of the Wiener Philharmoniker. She won an impressive 23 prizes between 1997 and 2009 at international harp competitions in Belgium, France, Austria, Hungary, Spain, the USA, and Germany, including the ARD International Music Competition in Munich - at which she was both a prizewinner and winner of the Audience Prize - and the "Grand Prix International Lily Laskine," one of the most prestigious harp competitions in the world. As a soloist Lenaerts has performed with the Symphony Orchestra of Bavarian Radio, Mozarteum Orchestra, Philadelphia Chamber Orchestra, Polish Chamber Orchestra, Brussels Philharmonic, and the National Orchestra of Belgium, amongst others.
She has made her solo debut at venues such as Carnegie Hall in New York, Wigmore Hall in London, Salle Gaveau in Paris, Grosses Festspielhaus in Salzburg, Bozar in Brussels, and the Royal Academy of Music in London, and in festivals such as the Rheingau Festival, Lockenhaus Festival, Dresden Musikfestspiele, Moritzburg Festival, and Aspen Music Festival. Lenaerts records for Warner Classics and is a faculty member at the Aspen Music Festival.
She studied at the Conservatories of Brussels and Paris. In addition to harp, she also studied harmony, counterpoint, and fugue at the Brussels Royal Conservatory.
This is her first appearance at PMF. 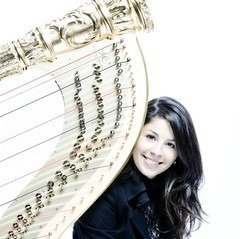