Born in Makó, Hungary, Robert Nagy started playing cello at age seven and by age twelve he became the winner of the National Cello Competition of Young Musicians in Hungary. His teachers at the Franz Liszt Music Academy in Budapest, where he graduated with distinction in performance and pedagogy, were Csaba Onczay and Miklós Perényi, and he further studied with Wolfgang Herzer at the Universität für Musik und darstellende Kunst Wien. In 1988 he won the David Popper International Cello Competition, and in 1989 he was awarded the International Florian-Prize in Venice. His career as an orchestral musician began with the Gustav Mahler Jugendorchester conducted by Claudio Abbado, where he became principal cellist, going on to serve as principal cellist of the Niederösterreichisches Tonkünstlerorchester for two years. In 1992 he became a member of the Wiener Staatsoperorchester and the Wiener Philharmoniker, and in 2005 he became the principal cellist of the latter. He has been a member of the Küchl Quartet since 2012. He is also active as a soloist performing all over Europe and has made numerous tours to Japan. As a devoted teacher he was appointed as professor at the Universität für Musik und darstellende Kunst Wien in 2009 and he gives masterclasses regularly in Europe, Korea and USA. This is his first appearance at PMF. 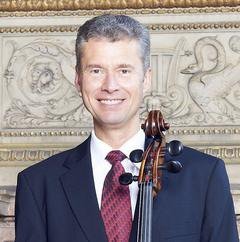