Tamás Velenczei began his orchestral career in 1983 as a member of the Budapest Symphony Orchestra. He performed with the Budapest Festival Orchestra as Principal Trumpet from 1992 to 1998. Velenczei became Principal Trumpet of the Berliner Philharmoniker in 2000. He is a member of the Berlin Philharmonic Brass Ensemble and also appears as a soloist and in various other chamber ensembles. He has also been teaching at the Orchester-Akademie since he became a member of the orchestra. In addition, he is a professor at the Franz Liszt Music Academy of Budapest.
Born in Hungary, Tamás Velenczei first studied in Szeged and Budapest. It was his primary school teacher who first recognized his musical talent, and sent him to the music school where he became interested in brass instruments. He completed his training through a scholarship to the Sir Georg Solti Foundation in Chicago and in San Diego. He has participated in PMF 12 times since 2006. This year he is scheduled to take part in the online education program and a digital concert. 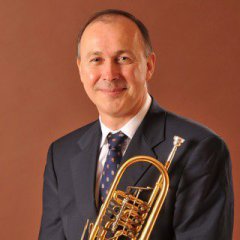