Born in Maryland, USA, Sarah Willis began playing the horn at 14 and then attended the Royal College of Music Junior Department in London, England. She went on to study full time at the Guildhall School of Music and Drama, where her teachers included Anthony Halstead and Jeff Bryant. She later studied with Fergus McWilliam in Berlin, where she became Second Horn in the Staatskapelle Berlin under Daniel Barenboim in 1991. During this time, Willis played as a guest with many top orchestras such as the Chicago Symphony, the London Symphony, and the Sydney Symphony Orchestra and performed worldwide as a soloist and in various chamber music ensembles. In 2001 Willis joined the Berliner Philharmoniker, becoming the first female member of the brass section. Willis is involved in many of the Berliner Philharmoniker education projects and especially enjoys creating and presenting their Family Concerts. She is passionate about music education and makes full use of digital technology and social media to reach audiences world-wide. She is also a regular broadcaster and interviewer on TV and online and fronts the classical music program Sarah’s Music for Deutsche Welle TV. She has participated in PMF six times since 2014. This year she is scheduled to take part in the online education program and a digital concert. 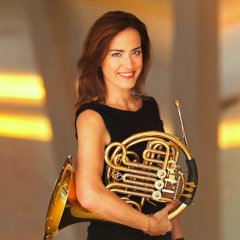