Born in 1954 in Bavaria, Germany, Manfred Preis studied with Prof. Gerd Starke in Munich and was a member of the Orchestra Academy of the Berliner Philharmoniker. In 1980 he became a member of the Deutsches Symphonie-Orchester Berlin, and since 1982 has been a member of the Berliner Philharmoniker.
His numerous awards include the Culture Prize of the City of Munich, the Sponsor Prize of the German Music Council, and first prize in the Prague Spring Competition. He has taught for many years in various orchestras and festivals: the Schleswig-Holstein Musik Festival, Gustav Mahler Jugendorchester, Jeunesses Musicales, Pacific Music Festival in Japan, and Festival Instrumenta in Mexico. He also teaches at the Orchestra Academy of the Berliner Philharmoniker and has teaching positions at the Hochschule für Musik Nürnberg-Augsburg and the Hochschule für Musik FRANZ LISZT Weimar.
An internationally reputed soloist and chamber musician, Preis is a member of chamber ensembles including Bolero-Berlin, Interclarinet, and the Blaser der Berliner Philharmoniker. He often plays with the Scharoun Ensemble, the Philharmonisches Bläserquintett Berlin, and the Ensemble Wien-Berlin, among many other ensembles.
This is his fifth appearance at PMF since 2009. 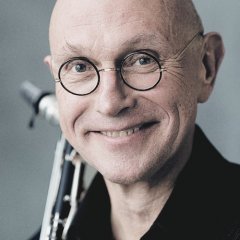