Rinat Shaham completed her musical studies in the United States at the Curtis Institute of Music, while starting to work professionally, singing Cherubino for the Vancouver Opera, Zerlina at Opera Philadelphia, and Dido for the Festival d"Aix en Provence. Since then, Shaham has enjoyed a successful international career, collaborating with major conductors, directors, orchestras, and opera houses around the world.
Recent and current season highlights include Judith in Bluebeard"s Castle with Simon Rattle and the Berlin Philharmonic, Preziosilla in La forza del destino at the English National Opera, Donna Elvira in Don Giovanni and Ottavia in L"incoronazione di Poppea at the Angers Nantes Opera, a New Year"s Eve Gala with Christian Thielemann, Lang-Lang, and the Staatskapelle Dresden, which was broadcast across Europe on ZDF TV, Berlioz Les Nuits d"été with Dan Ettinger and the Stuttgarter Philharmoniker, and Beethoven"s Symphony No. 9 with Ludovic Morlot and the Seattle Symphony.
Future plans include productions at La Monnaie in Brussels, and the Nantes Anger Opera, as well as concerts with the London Symphony Orchestra, St. Louis Symphony Orchestra, Hallé Orchestra, and Warsaw Philharmonic Orchestra.
Internationally recognized as one of today"s finest interpreters of Bizet"s Carmen, she first performed the role at the 2004 Glyndebourne Festival. She has since portrayed Carmen at numerous opera theatres around the world, including those in Vienna, Rome, Munich, Berlin, Hamburg, Stuttgart, Cologne, Baden Baden, Toronto, and across the United States to name but a few.
Shaham has also received international accolades for her interpretation of Bernstein"s Symphony No. 1 "Jeremiah," which she has performed with conductors such as Leonard Slatkin, Christoph Eschenbach, David Robertson, and John Axelrod, with orchestras including the New York Philharmonic, San Francisco Symphony, Chicago Symphony, Israel Philharmonic, Philadelphia Orchestra, and Orchestre de Paris.
She has been featured in many recordings, including collaborations with William Christie for Erato and Andre Previn for Deutsche Grammophon. She also made her feature film debut as "the Jazz Singer" in the István Szábo film "Taking Sides," with Harvey Keitel. Her performance as Carmen with the Australian Opera has also been released on DVD.
This is her first appearance at PMF. 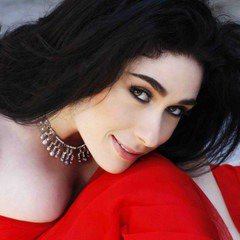