Born in Tottori, Shiozaki graduated from the Faculty of Agriculture of Tottori University, majoring in Agricultural Sciences, and completed her studies majoring in vocal music at the graduate school of the Musashino Academia Musicae. She furthered her studies at the 11th New National Theatre Opera Studio and went on to study in Berlin after being chosen to become a scholar for the Program of Overseas Study for Upcoming Artists by the Agency of Cultural Affairs in 2011. In 2012 she made her German debut performing as Maddalena in Verdi"s "Rigoletto" in a production of the Opera Classica Europa. In the same year she performed as Suzuki in a production of "Finding Butterfly" at the Soho Theatre in London. She performed as Suzuki again in a production of "Finding Butterfly" held as an Agency for Cultural Affairs-promoted cultural program utilizing university facilities and sponsored by Tottori University, and then again in a production at "Tori no Engekisai" (Play Festival 6 in Kano Town, Tottori). Other operatic performances include roles as Dorabella in "Cosi fan Tutte," Ulrica in "Un ballo in maschera," Sonyetka in "Lady Macbeth of the Mtsensk District," Marie in "Dialogues des carmélites," Quickly in "Falstaff," La Frugola in "Il tabarro," and Zita in "Gianni Schicchi." She is a member of the Japan Federation of Musicians. 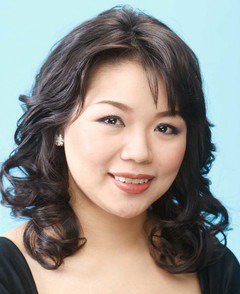