The Pacific Music Festival Orchestra (PMF Orchestra) consists of approximately 120 young musicians between the ages of 18 and 29 who are selected through worldwide auditions. Distinguished conductors and artists, including musicians from internationally renowned orchestras of Europe and the U.S.A. such as the Wiener Philharmoniker, Berliner Philharmoniker, Philadelphia Orchestra, and Chicago Symphony Orchestra provide guidance to these musicians for nearly four weeks starting in July. Concerts showcasing the orchestra"s achievements are presented not only in Sapporo and other cities in Hokkaido, but also in other metropolitan areas such as Osaka and Tokyo. To date, more than 3,000 young musicians from over 70 countries and regions have been members of the PMF Orchestra, and many of these alumni have joined major professional orchestras around the world and/or are active as soloists. 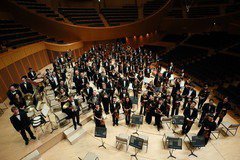