Rainer Küchl entered the Universität für Musik und darstellende Kunst Wien where he studied with Franz Samohyl. Küchl became Concertmaster of the Orchester der Wiener Staatsoper and the Wiener Philharmoniker in 1971. He has performed with many of the world"s leading conductors and orchestras, including Claudio Abbado, Karl Böhm, Leonard Bernstein, the Wiener Symphoniker, Staatskapelle Dresden and the NHK Symphony Orchestra, Tokyo. In recognition of his decades of intensive and varied musical service in Japan, Küchl was awarded the "Order of the Rising Sun, Gold Rays with Neck Ribbon" in 2010. This is his ninth appearance at PMF since 1993. 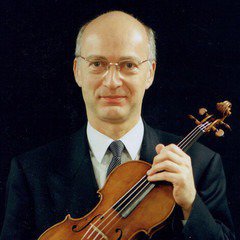