British oboist Jonathan Kelly studied history at Cambridge University and oboe at the Royal Academy of Music in London and the Paris Conservatoire. At 23 he was appointed solo oboist of the City of Birmingham Symphony Orchestra, a position he held for ten years. During those years he was an active member of the Birmingham Contemporary Music Group and a regular guest of the Chamber Orchestra of Europe. In 2003 he became Principal Oboist of the Berliner Philharmoniker. He works regularly as a soloist with the Berlin Baroque Soloists, recording works by J.S. Bach, C.P.E. Bach, and Vivaldi. He is also a frequent guest of the Scharoun Ensemble Berlin, taking part each year in their late-summer Zermatt Festival as a performer and a teacher of the festival academy. Kelly was a member of the Sabine Meyer Wind Ensemble, and is now successor to Hansjörg Schellenberger in the Ensemble Wien-Berlin. He enjoys teaching, both with the Orchestra Academy of the Berliner Philharmoniker and in masterclasses all over the world. He also teaches at the Hochschule für Musik Hanns Eisler Berlin. He has participated in PMF three times since 2016. This year he is scheduled to take part in the online education program and a digital concert. 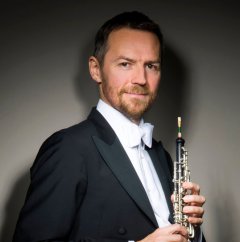