Denis Bouriakov is currently Principal Flute of the Los Angeles Philharmonic, having served the same position for a number of years in the Metropolitan Opera. One of the most active and sought after soloists in the flute world, he has won prizes in many international competitions, including the Munich ARD, the Jean-Pierre Rampal, the Prague Spring, the Carl Nielsen, and the Kobe competitions. Bouriakov has recorded various works, from traditional flute repertoire to his own arrangements of concertos originally written for other instruments. He performs frequently in recitals and has annual solo recital tours to Japan. He performs as a soloist with orchestras around the globe, including the Norwegian Radio Orchestra, the Moscow Philharmonic, the Prague Chamber Orchestra, the Ensemble of Tokyo, the Hiroshima Symphony Orchestra, the Munich Chamber Orchestra, and the Ensemble Orchestral de Paris. Born in Crimea, Bouriakov was given a place at the Moscow Central Special Music School at the age of 10, subsequently touring as a prodigy soloist to over 20 countries, including performances for Pope John Paul II, Prince Michael of Kent, and the presidents of Russia, Romania, and Indonesia. He went on to study with Professor William Bennett (OBE) at the Royal Academy of Music in London. He was a member of the 2003 PMF Orchestra and joined the PMF faculty in 2017, participating in that capacity twice since. This year he is scheduled to take part in the online education program and a digital concert. 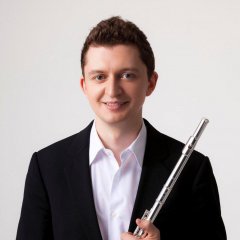