A winner of several national violin competitions in her native Armenia, Ana Landauer began her violin studies at age 6 with her father, and later at the Tchaikovsky Academy of Music with Villi Mokatzian. She made her debut with the State Philharmonic Orchestra of Armenia at the age of 14, and has performed since then in major halls throughout Armenia. In the United States, she has studied at Duquesne University with Movses Pogossian and later with Robert Lipsett at the University of Southern California. Winner of the 1995 Elizabeth Harper Vaughn International Competition in Tennessee, she has appeared at the Tanglewood Music Festival, the Shady Side Music Festival, and the Music Academy of the West in Santa Barbara, and served as Concertmaster and Guest Soloist for the National Repertory Orchestra in Colorado. She has performed with the Los Angeles Chamber Orchestra, Pasadena Symphony, Pacific Symphony, and Mozart Camerata. Ana Landauer is currently Principal Second Violin of the Los Angeles Opera Orchestra, and is an active chamber musician in the greater Los Angeles area. This is her first appearance at PMF. 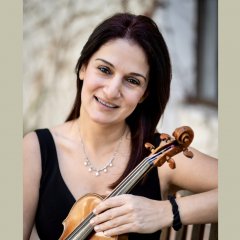