Mariko Anraku, active as soloist and chamber musician, is recognized as one of the world"s outstanding harpists. Since 1995, she has held the position of Associate Principal Harpist of the Metropolitan Opera Orchestra. Since her debut as soloist with the Toronto Symphony Orchestra, Anraku has appeared with the Vienna Chamber Orchestra and New Japan Philharmonic Orchestra, among others. Her impressive list of awards includes the Pro Musicis International Award and First Prize at the First Nippon International Harp Competition. Anraku"s strong commitment to expanding the boundaries of contemporary harp repertoire resulted in an invitation to premiere works by Toshio Hosokawa in Germany, collaborating with traditional Japanese musicians and monks. She gave the US premiere of Jean-Michel Damase"s Concerto "Ballade" with the Cincinnati Chamber Orchestra. She has recorded exclusively for EMI Classics, including 3 solo albums and a duo album with eminent flutist Emmaneul Pahud. Anraku holds bachelor"s and master"s degrees from the Juilliard School and an Artist"s Diploma from the Royal Conservatory of Music in Toronto. She also studied Oriental Art History at Sophia University in Tokyo. Her teachers have included Nancy Allen, Judy Loman, and Kumiko Inoue. Anraku is currently a faculty member of the Manhattan School of Music. This is her seventh appearance at PMF since 2011. 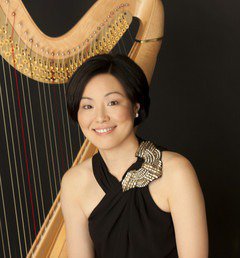