David Herbert has been principal timpani of the Chicago Symphony Orchestra since 2013 after being appointed by Music Director Riccardo Muti. He previously served as principal timpanist of the San Francisco Symphony (SFS) and the New World Symphony. He is widely considered a leader of cutting-edge solo timpani repertoire, accomplishing many commissions and world premiere performances, including his 2005 premiere with the SFS of William Kraft"s "Concerto No. 2: The Grand Encounter for Timpani and Orchestra," which was written specifically for him. His 2013 performance of this work with the Symphony of Silicon Valley led to a recording with Laurel Records. Herbert is sought after as a chamber musician and clinician and has conducted master classes throughout North America, Japan, China, and Europe. He currently serves as Adjunct Professor of Percussion at DePaul University, and performer/instructor at the Aspen Music Festival and School. Herbert graduated from the St. Louis Conservatory of Music before obtaining his master"s degree from the Juilliard School. Highlights of his early career include performing under Leonard Bernstein"s direction as a Tanglewood Music Fellow, an international tour with the Moscow Chamber Orchestra, and performing on Metallica"s S&M concerts and recordings. This is his eighth appearance at PMF since 2005. 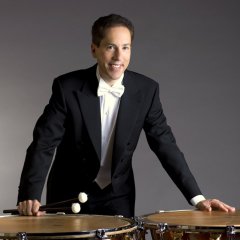