Timothy Hutchins has received international critical acclaim as Principal Flute of the Orchestre symphonique de Montréal (OSM) since 1978, as a concerto soloist, as a duo recitalist with his wife, pianist Janet Creaser Hutchins, and as a chamber musician. Hutchins has performed as Principal Flute with the New York Philharmonic, the Boston Symphony Orchestra, the Pittsburgh Symphony Orchestra, and the NHK Symphony Orchestra, and is regularly invited to perform with the World Orchestra for Peace. He can be heard on most OSM recordings, including Ibert"s Flute Concerto, in addition to other recordings of concertos, recitals, and chamber music. He also participated in recordings with the Boston Symphony Orchestra under Seiji Ozawa, Vladimir Ashkenazy, and Leonard Bernstein, and with the Pittsburgh Symphony Orchestra under Mariss Jansons. He studied flute in London at the Trinity College of Music, at Guildhall School of Music and Drama, in Canada at Dalhousie University, and at McGill University, where he currently teaches. This is his first appearance at PMF. 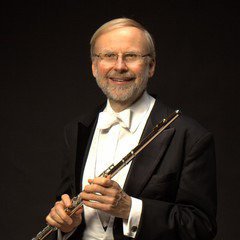