Denson Paul Pollard began as bass/tenor trombonist/bass trumpet player with the Metropolitan Opera Orchestra in 2007. Pollard has also held positions as the bass trombonist of the Finnish Radio Symphony Orchestra and the Hong Kong Philharmonic. He has performed with the New York Philharmonic, Chicago Symphony Orchestra, Philadelphia Orchestra and Los Angeles Philharmonic. His teachers have included Jim Roberts, David Gier, George Krem, Charles Vernon and Joeseph Alessi. Pollard was awarded a Master of Musical Arts degree and a Doctorate of Musical Arts in performance and pedagogy from the University of Iowa and holds a Bachelor of Science degree in music education from Jacksonville State University. Pollard is a member of the brass faculty at Mannes School of Music, Bard College and the Juilliard School. He has performed as a soloist around the world and has recorded three solo CDs entitled "Up From Below," "Point in Time" and "Listening." He can also be heard on three MET Opera Brass recordings and a recent collaboration CD with James Markey, bass trombonist of the New York Philharmonic, entitled "The Bass Trombonist"s Guide to Orchestral Excerpts." He was a member of the PMF Orchestra in 1995 and this is his seventh appearance at PMF as a faculty member since 2010. 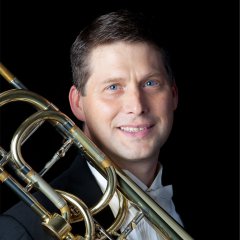