Daniel Matsukawa has been principal bassoon of the Philadelphia Orchestra since 2000. He studied at the Juilliard School before attending the Curtis Institute of Music, where he was a pupil of retired Philadelphia Orchestra Principal Bassoonist Bernard Garfield. Matsukawa has been a recipient of numerous awards and prizes, including a solo concerto debut at Carnegie Hall at the age of 18. He has appeared as soloist with several other orchestras, including the Philadelphia Orchestra, the National Symphony, the Virginia Symphony, the Auckland Philharmonic, and the Sapporo Symphony Orchestra. He is an active chamber musician and has performed and toured with the Marlboro Music Festival. Matsukawa performs and teaches regularly at the National Orchestral Institute. He is a regular member of the faculties of both the Curtis Institute of Music and the Boyer College of Music at Temple University. Prior to his post with the Philadelphia Orchestra, Matsukawa served as principal bassoon with the National Symphony in Washington D.C., the Saint Louis Symphony, the Virginia Symphony, and the Memphis Symphony. He was a member of the PMF Orchestra from 1992 to 1994, and joined in PMF Faculty in 2001. Matsukawa also studied conducting privately with Otto Werner Mueller, head of the Conducting Department at the Curtis Institute of Music, and he has appeared at PMF as a conductor of the PMF Orchestra since 2009. This is his sixteenth faculty appearance at PMF since 2001. 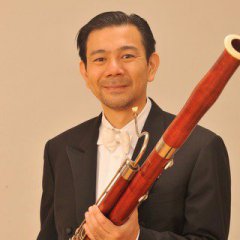