Stephen Williamson is the principal clarinetist of the Chicago Symphony Orchestra. Williamson was the principal clarinetist of the New York Philharmonic (2013-14 season) as well as principal clarinetist of the Metropolitan Opera Orchestra (2003-11). He has been a frequent guest principal clarinetist with the Saito Kinen Festival Orchestra. Williamson is currently on the faculty of DePaul University. He has served on the clarinet faculty at Columbia University and the Mannes College of Music. An avid soloist and chamber musician, Williamson has performed extensively in the United States, Europe and Asia. Most recent concerto performances include the Mozart Clarinet Concerto with both the Pacific Music Festival Orchestra (2011) and the Metropolitan Opera Orchestra under Fabio Luisi (2012). He received his Bachelor"s degree and Performer"s Certificate from the Eastman School of Music, and his Master"s degree from the Juilliard School. As a Fulbright Scholar, he furthered his studies at the Hochschule der Künste in Berlin, where he collaborated with various members of the Berliner Philharmoniker. Williamson was the grand prize winner of the 1994 Boosey & Hawkes/Buffet Crampon First Annual North American Clarinet Competition. This is his third appearance at PMF since 2010. 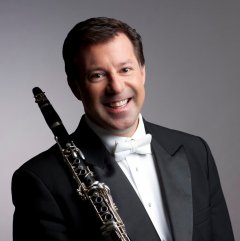