Boris Allakhverdyan was appointed Principal Clarinetist of the Metropolitan Opera Orchestra in 2013. Prior to this, he was Associate Principal Clarinet of the Kansas City Symphony. He is the Grand Prize and the Gold Medal winner of the 2007 Fischoff National Chamber Music Competition. Allakhverdyan also serves as Principal Clarinet of the Britt Festival Orchestra in Jacksonville, Oregon. He has performed with the Cleveland Orchestra and the Los Angeles Philharmonic, and has participated in the Lucerne Festival Academy. He is an active educator, having given master classes at the University of Missouri-Kansas City, Truman State University, the Colorado Music Festival, and the Latin American Clarinet Academy in Caracas, Venezuela. This is his second appearance at PMF. 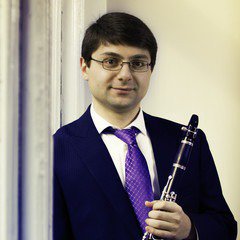