In 2014, the Chitose Philharmonic Orchestra"s 20th anniversary, the Chitose Junior Orchestra was established with the aim of providing young people with the joy of orchestral performance. In March of this year, the orchestra toured Italy for ten days and performed in Cremona, which was enjoyed by a full audience and featured in local media. In addition to their annual regular concert, the orchestra appears in various concerts in Hokkaido and collaborates with other performing organizations. Under the guidance of musicians residing or born in Chitose, the 60 members of the orchestra range from kindergarten to high-school students. 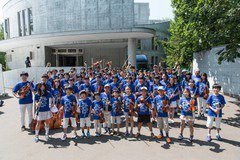