The Chitose Junior Orchestra is a youth orchestra founded in March of 2014 in celebration of the 20th anniversary of the local-community Chitose Philharmonic Orchestra. The Chitose Junior Orchestra is made up of young people from preschool to university age, with their primary performances taking place at annual concerts hosted by the orchestra itself, but also at various events in Chitose. In December of 2016, the orchestra will perform at Sapporo Concert Hall Kitara, and preparations for an Italian tour in 2018 are currently underway. This is their first appearance at PMF. 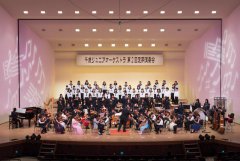