Originally founded as the Sapporo Citizen Symphony on July 1, 1961, it was renamed the Sapporo Symphony Orchestra in 1962. In 2009, the orchestra became the first public interest incorporated foundation orchestra in Japan. It is the only professional orchestra in Hokkaido, an area of 83,457 square kilometers which makes up 22% of the Japanese archipelago and has a population of more than 5.4 million. The orchestra is affectionately known as "Sakkyo" and the Sapporo Concert Hall Kitara, acclaimed for its splendid acoustics, has been the base and center of the orchestra's activities. In recent years, the Sapporo Symphony Orchestra has been gaining further popularity as the orchestra which presents the vast land of Hokkaido with a clear sound and a dynamic and powerful expression. To date, prominent conductors have been Masao Araya, Peter Schwarz, Hiroyuki Iwaki, and Kazuyoshi Akiyama. Tadaaki Otaka served as Resident Conductor from 1981 to 1986, was appointed Principal Conductor in 1998, and was named the Music Director in 2004 and finished his tenure in March 2015. From April 2015, Max Pommer becomes the Chief Conductor, and Tadaaki Otaka and Radomil Eliška are Honorary Music Director and Honorary Conductor respectively. The orchestra is active recording CDs and has presented Sibelius Symphony Cycle with Otaka, and with Eliška, presented Brahms and Tchaikovsky works addition to Czech music. The orchestra has performed overseas in the United States, the United Kingdom, Germany, Italy, Southeast Asia and Korea in concerts which were highly acclaimed. The orchestra visited Taiwan in March 2015 with Otaka. When giving concerts in many cities, towns and villages within Hokkaido, one of the orchestra's important roles includes visits to educational institutions and welfare facilities. Up to the present, the visits number several dozen. 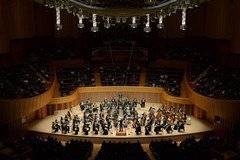