Born in Kawasaki, Japan, Mayumi Shimizu began piano lessons at the age of 5 and then trombone lessons at 10. She studied applied physics and physico-informatics at Keio University in Tokyo, where she obtained her first master"s degree, before going on to study music. In 2005 she began studying trombone with Prof. Branimir Slokar at the Freiburg University of Music, graduating in 2010. She then continued her studies under Prof. Slokar at the Bern University of Music, obtaining her master"s degree in 2012. Having completed her studies with excellence, she was given the opportunity to perform as soloist with the Camerata Bern in the world premiere of "Re-slide," a concerto for trombone and orchestra by Vito Zuraj specially commissioned for her final examination.
Shimizu has since performed with orchestras such as the Berliner Philharmoniker, Deutsche Oper Berlin, Rundfunk-Sinfonieorchester Berlin, NDR Radiophilharmonie, and Saito Kinen Festival Orchestra.
From 2007 to 2009, she was a member of the Karajan Academy of the Berliner Philharmoniker, studying with their principal trombonist, Prof. Christhard Gössling. In 2009 she assumed her first professional and principal position, in the Bruckner Orchestra Linz, and since the 2012/2013 season she has been principal trombonist of the SWR Symphonieorchester, based in Baden-Baden and Freiburg.
In addition to her orchestral engagements, Shimizu is also active in performing solo recitals, chamber music, and solo concertos with orchestra. As a soloist she has won several competitions, including the Gdansk International Brass Competition in Poland, and has been invited to international music festivals such as the IPV Symposium (Germany), Lieksa Brass Festival (Finland), Lätzsch Trombone Festival (Germany/Netherlands), and Thailand Brass Festival. She also enjoys working with composers, having given numerous world premieres. Since 2017 she has been teaching at the Hochschule für Musik und Theater "Felix Mendelssohn Bartholdy" Leipzig. 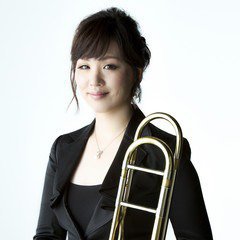