Born in Osaka, Mononobe graduated from the Kyoto City University of Arts in 1988. In the same year he became Principal Viola of the Telemann Chamber Orchestra, and in 1991 he moved to Europe to study at the Universität für Musik und darstellende Kunst Wien. After actively performing as a soloist and chamber/orchestra musician in Europe he joined the Sapporo Symphony Orchestra in 1994. He has since appeared in various halls in Hokkaido and throughout Japan. Recently, his activities have been extended to period-instrument performance, and in 2012 he formed Musica Antiqua Sapporo, a Baroque ensemble that went on to receive the Sapporo Art Festival"s Grand Prize in 2014. Mononobe studied violin with Momoo Kishibe and Gerhard Bosse, and viola with Ulrich Koch and Thomas Kakuska. He also studied baroque violin with Eduard Melkus, Hiro Kurosaki, and Ryo Terakado. 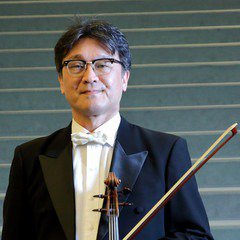