Narumi Okubo graduated from the Kagawa Prefectural Sakaide High School Music Department before going on to study at the Tokyo University of the Arts, where she graduated from both the Faculty of Music Instrumental Music Course and the Graduate School of Music. Okubo has won various prizes including first place in the 60th Student Music Concours of Japan in Osaka, the gold medal at the 12th Japan Flute Convention Ensemble Award, High School Division, the 16th Japan Flute Convention Solo Division prize, and first place in the 19th Japan Flute Convention, Piccolo Division. In 2018, she received the Kagawa Prefecture Culture and Arts Newcomer Award. Okubo is a part-time lecturer at the Nagoya University of the Arts and is principal flutist of the Nagoya Philharmonic Orchestra. 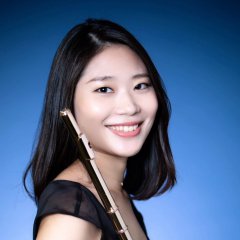